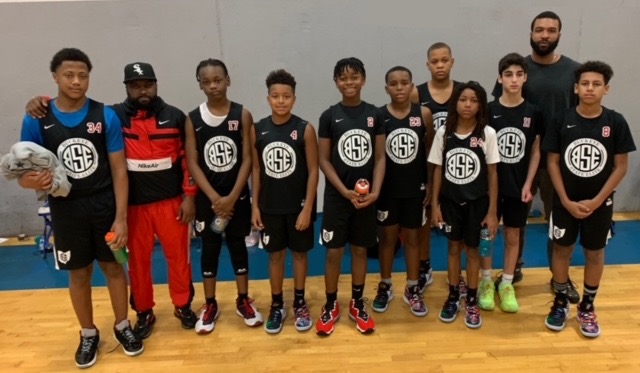 Click on names highlighted in red for additional information

As a new team and organization, Drew Lavender’s 2027 Buckeye State Elite (BSE) team burst onto the state & national scene at the Hell’s Kitchen event in Mason, Ohio last week.  With their 5-1 runner to a runner-up finish, BSE formally announced to all that they intend to be a force to reckoned with when the 2021 travel season tips off in March.  BSE is built on a solid foundation, as they are being coached by a couple of Central Ohio legends in Andrew Lavender and Jamelle Cornley, both of whom starred with the storied Brookhaven High School program over a decade ago, and both of whom went onto play high major college and professional basketball.

In addition, BSE’s mission is on solid ground as well and is based on tried and true principles. “We play the right way so that our players will be ready for freshman and JV ball, with some [players] getting minutes on varsity teams,” said Head Coach Drew Lavender.  Moreover, Lavender and Cornley have set lofty goals for the team as well; “…we want to get better each game; we want to be in everybody’s top 10 (rankings), and we can be because we have special kids,” continued Lavender.  Because just about all of the kids on the team train with Lavender, he has control of what they’re being taught. Also, since Lavender plans to keep his squad in the heat by playing in major tournaments around the state and country, if his team can achieve some success, they will have the opportunity gain national exposure.

In terms of the team’s construction, we saw excellent guard play, the ability to score from the wing, as well as solid post presence. In addition, the starting line up includes several players we have previously added to our state and citywide rankings, such as Sammy Dari (5’5”/PG/Strongsville), Albee Moore (5’0”/CG/Pickerington, Landon Evans (5’3”/WF/Reynoldsburg), Antwon Pollard (5’6”/WF/Columbus) and Jeffery Reynolds (5’9”/CF/Olentangy). The BSE program also has a very talented 3rd grade team, and Lavender is very optimistic with the team’s potential for success.  We intend to keep a close eye on both teams early next spring.  Oh yea, we should get a look at both squads at our March 26th-28th Buckeye Prep Invitational Tournament.

In addition to the 2027 squad, the BSE organization also fields a 3rd grade team that has already shown some promise.  Interestingly enough, although the team participates in 3rd grade events, the roster is primarily composed of 2nd graders. Included on the rosters are: Jayce Fisher (SG/2030/Reynoldsburg), Rondale Parsons (WF/2030/Columbus), Tekoah Thlkeo (PG/2030/Columbus), Landon Miller (SG/2031/Dublin), Antianste Rush (PG/2031/Powell), Zander Pughsley (PG/2031/Columbus), Maurice Anderson (WF/2031/Columbus).  From what we’ve seen and heard about some of the above players, BSE’s 2030 team is going to be a problem.