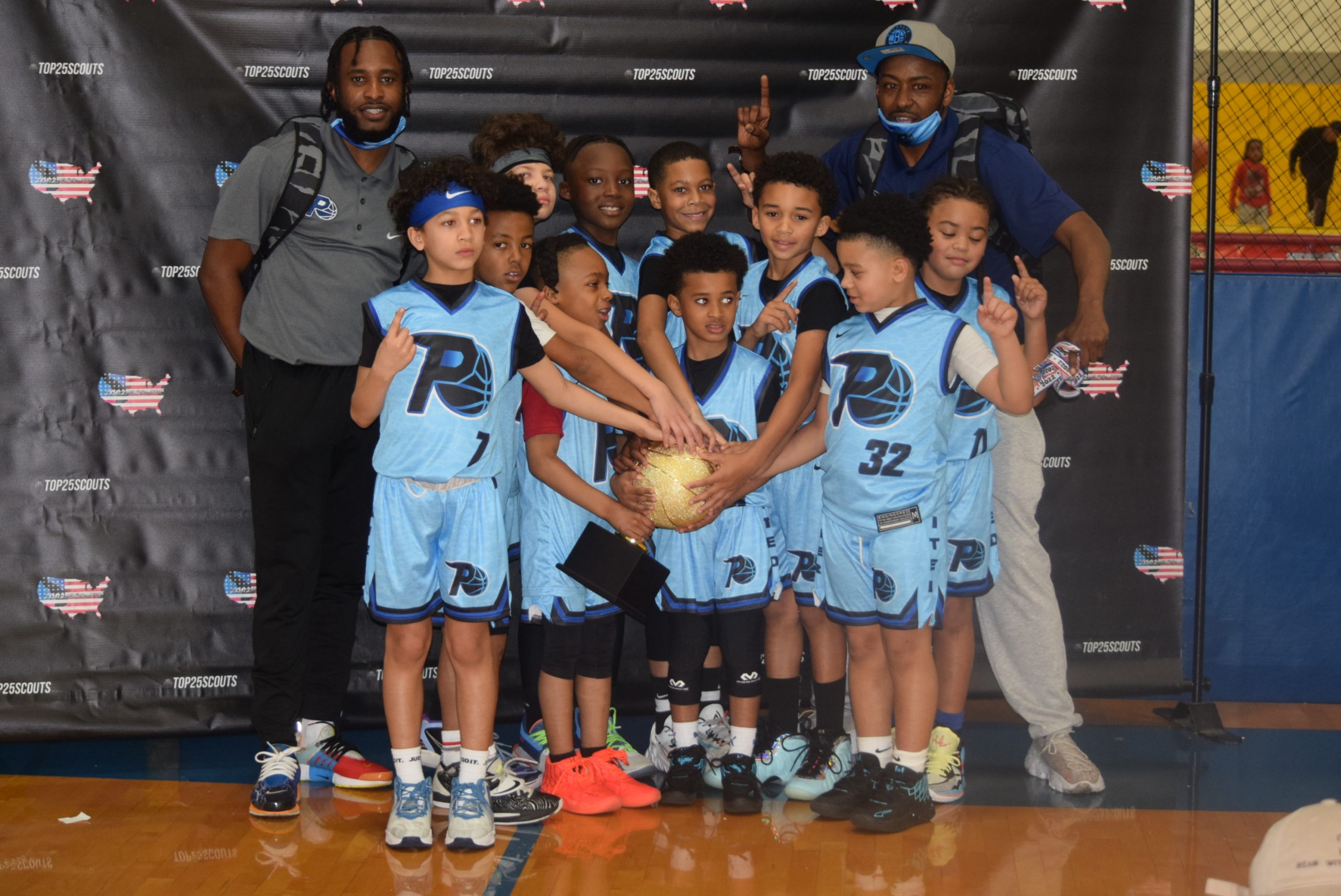 As expected, the competition at Terry Holt’s March Madness Tournament was off the charts. Case in point, in the 2nd grade division alone, there were 5 nationally ranked teams in the event, including the newly minted #1 team in the country in Team Threat.  Because this event included a 3-team super pool,  3 nationally ranked teams faced off early in pool play.  The opening game in the super pool saw Team Threat get by BNU 42-24.  In game 2, Premier United defeated Team Threat 41-31. The 3rd game was much closer as Premier United would win a squeaker over BNU 49-47.  Although we had seen BNU and Team Threat previously, we got our first look at Premier United at this event. Needless to say, this team is loaded with talent, and with their win this past weekend, they should ascend to the #1 spot in the nation when the rankings are updated!

We were super impressed with King Tari (4’6″/PG/2032/Stockton, CA), who demonstrated the ability to handle the rock under pressure and knock down perimeter shots when left open.  Tari is a big guard who knows how to use his big frame to ward off defenders and to power his way to the basket.  So far this young season, Tari is the best shooter we’ve seen in this class, and he should be mentioned among the best players in his 2032.  We were also impressed with Khalil Brooks (4’6″/PG/2032/Topeka, KS).  Brooks is highly skilled, crafty and can score the rock.  He plays with good pace; is poised and competes at a high level.  We also saw him play up in the 3rd grade division with 1 Movement Hoops, where he more than competed.  We have to give some props to Trey Clemons (4’9″/WF/2032/VA), who was simply too strong to keep out of the paint.  Clemons is well traveled, so we already knew he was good, but his play in Cincinnati was still impressive.  We also saw some good things out of Dexter Turner Jr. (4’9″/PF/2032/Beloit, WS), who has good length, rebounds at a high level, runs the floor well and has loads of upside potential. Team Threat seems to get it done by committee and often has multiple leading scorers in a tournament.  From what we can tell, Justin Coleman (4’7″/PG/2032/PG County, MD) is the most consistent performer, while Josh Morgan-Green (4’4″/PG/2032/MD) comes off the bench to add a spark. We were impressed with the play of Jacob Gorham (4’6″/CG/2032/MD) this weekend and his athleticism and ability to score the rock.  He has good length and really attacks the cup.

In pool B, the #18th ranked Buckeye Prep Hoopsters went undefeated with easy wins over Swish Parker Elite (28-10) and J Anthony Elite (34-15).  In the first round of bracket play, the Hoopsters ran into nationally ranked BNU.  Although BNU jumped out to a 7-0 lead, Buckeye Prep would come roaring back to take a 8-7 lead.  For most of the fist half the score would remain close, however,  in the second period, BNU would take a lead which they never relinquished, and despite finishing with only 4 players after Marion “Big Baby” Mathews fouled out, BNU would get the 11 point win.  This win was all about the backcourt play of Bobby Peebles (4’6″/PG/2032/St Louis, MO) and King Mo Peace (4’6″/PG/2032/Knoxville, TN). Both guards handled the Hoopsters full court pressure well, played under controlled, did not turn it over and were responsible for the bulk of BNU’s scoring. Bobby Peebles continues to impress us with his ball skills, savviness and overall play. This kid is poised, can’t be sped up, and he has a good feel for the game. Every time we see him he just gets more impressive!  We could say the same thing about King Mo Peace, who shot the heck out of the ball all weekend and consistently found open teammates with pin point passes.  From what we saw from Peace, he deserves to remain among the top of the national player rankings!  Buckeye Prep was powered by David Johnson III (4’6″/WF/2032/Worthington, OH), Jordan Taylor (4’5″/PG/2032/Blacklick,OH), Tony Jones Jr (4’5″/PG/2031/Columbus, OH) and Jase Owens (4’7″/PF/2032/Columbus). All four players led the Hoopsters in scoring at some point and played tough defense.

Pool C was dominated by the Hoosier Phenoms who took down RD Company Underdogs 39-2 and Run It Up 39-4. In the opening round of bracket play, the Phenoms took down the #1 ranked Team Threat by a lopsided score of 54-30, but suffered a simular fate in the championship game as Premier United notched an easy 42-28 over the Phenoms to claim the title. Standouts for the Phenoms included Tristian Graham (4’5″/PG/2032/Indianapolis, IN), Ayden Garth (4’8″/WF/2032/Indianapolis, IN) and Camden Day (4’5″/PG/2032/Indianapolis, In). Interestingly, the Phenoms were not included in some recent rankings, but their handling of the top team of the country has earned them a seat at the table! Below is list of standout performers in the form of 3 All-Tournaments teams. In closing, the 2022 travel season is only a few weeks old and already many of the top teams are showing up at the some tournaments in order to find the best competition they can find.  This is only going to make these kids that much better. Follow us on IG @robt1!