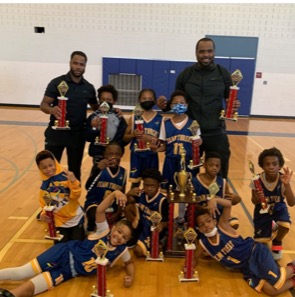 As has been the case for over a decade, Gary Pickney’s Maryland Invitational Tournament proved to be super competitive this past weekend.  Case in point, in the 2nd grade division alone, 4 nationally ranked teams pulled up to the DMV and were treated to pressure situations and a hostile environment.

The class of the event was #3 ranked Team Triple Threat 2032 who encountered little resistance on their trek to the championship.   In fact, Team Triple Threat beat each of their opponents by 30 plus points! Why are they so dominant? From what we saw up close and personal, there are at least 3 factors that make them tough to beat.  First and foremost, Threat has a lot of individual talent, which includes bigger and stronger guards who can both defend and score.

Those guards include Justin Coleman (4’7”/CG/2032/Ft Washington, MD), Ronald Colbert (CG/2032/Clinton, MD), and Trey Clemons (4’8”/WF/2032/ MD). Add in Josh Morgan-Green (4’4”/PG/2032/Upper Marlboro, MD) as another scoring threat, and you can start to see why this team is such a problem and was undefeated the last 2 years!  Moreover, these kids have been playing together for 3 years in some cases, and have played in almost 80 games together between AAU and area basketball leagues.  Finally, they run an effective full court diamond press and a tight 1-2-2 half court zone that just gives teams fits.  As you would expect, kids this young are going to struggle with zone presses and zones in general because they can’t consistently pass the ball up/cross court and knock down jump shots. Bottom line, Team Threat’s #3 national ranking is well deserved!

Although they lost the Team Triple Threat by 30 points (9-39), #6/#7 ranked Team Thrill is a quality team as well.  They, too run a diamond press, which is difficult to break if your guards are not strong and confident handling the rock.  They have solid guard play with TJ Baldin and Davin DeJesus and  and good size with Jayden Hardy.  Thrill’s path to the championship game included wins over the Buckeye Prep Hoopsters (17-7), Team Shammgod (21-19), DC Premier (18-11), and the Bowie Falcons (42-33).  It should be noted that the game between Team Thrill and Team Shammgod was an instant classic that went right down to the wire. We have to mention the outstanding play of Team Shammgod’s Aiden Charles, who almost single handily willed his team to a comeback win. This kid is a man child and was almost unstoppable to the cup. More specifically, this kid was great in transition while finishing tough euro-step drives to the basket. We also liked his teammate, Troy Collins Jr. who displayed elite ball skills and craftiness at the point.

The #13th ranked Buckeye Prep Hoopsters made their 2022 debut at the MIT and finished with a respectful 4-2 finish and a final four berth.  The Hoopsters are blessed with good guard play and do most of their damage with a smothering man-to-man press.  Offensively, the Hoopsters get it done with balanced scoring from Jordan Taylor, Tony Jones Jr., Jase Owens, David Johnson III and Kaiden Graves. Defensively, Carter Watson is a key contributor to the team’s ability to bring pressure.  Buckeye Prep’s weekend included wins over DC Premier (23-12), Team Shammgod (16-2), Team Delaware (32-3), We R 1 (21-17), and losses to Team Thrill (7-17) and Team Triple Threat (1-38).  Next up for Buckeye Prep is Top 25 Scouts’ March Madness Tournament in Cincinnati, OH.

Of the four final 4 teams, we saw very little of the Bowie Falcons.  However, from their record and final four appearance, the Falcons appear to be a quality team.  According to program officials, standout performers for the team include Avon Hilton (CG/2032/Landau, MD) and Clinton Carter (WF/2032/Bowie, MD). We do know they beat We R 1 (30-20), Riverside Hawks (32-21), Runnin Mavericks (25-5), and lost to Team Triple Threat (13-35) and Team Thrill 2032 (33-42).  All-in-all it was a very competitive tournament and a great start to the 2022 AAU season.  Finally, is our own list of All-Tournament Teams.  We did not get a chance to see every team play, but we did our best to find the most standout performers we could. Finally, we have updated our 2032 National Player Watch list and the link is below.  We will be looking for additions throughout the spring and summer at elite tournaments and camps.  Follow us on IG @robt1