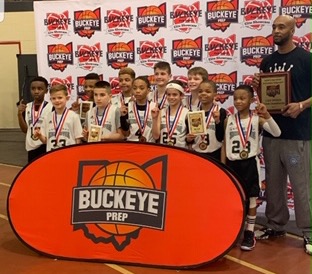 Although Derrick Zeigler’s 2028 OBC Showstoppers were only able to complete a 1/3 of their 2020 travel season, they were still able to enjoy success. For the sake of full disclosure, due to the COVID-19 crises, Zeigler’s squad was limited to playing more of a local schedule.  With that said, they made the best of a bad situation, and finished the virus-shortened season with an impressive 19-1 over all record. What’s important to note, when OBC played a more traditional schedule in 2019, they logged in an impressive 37-2 record, including a championship at the 2019 Buckeye Prep Invitational Tournament.

When asked about what he attributes his team’s success to, Coach Zeigler pointed to several areas. “We play together, we are unselfish; we share the ball and I have 5 guys who have bought into team play and who would be starters on another team,” said Zeigler. “ We also defend at a high level,” continued Zeigler. Despite his team’s significant success, Coach Zeigler understands where they need to improve to take the next step. “We are a big or two away from being able to compete at the national level,” Zeigler said.

When you look at OBC’s roster, it’s understandable why they have enjoyed so much success. Marlon Jackson (5’0”/PG/2028/Garfield Heights) runs the show and is easily one of the top 5 players in the state in his class.  Jackson is a consummate floor general who is highly skilled, smart and equipped to knock down the 3-ball at a high rate. He’s not just a scorer; he is an excellent player maker as well. The rest of this loaded roster includes: Jordan Taylor (5’3”/CG/2028/Twinsburg); Dylan Zeigler (5’3”/WG/2028/Shaker Heights); Danny Piper (5’0”/PG/2028/North Royalton); and Luke Bates (5’7”/PF/C/2026/Youngstown).

It may be the off-season, but OBC is still getting in some work.  Specifically, the team is currently participating in the TNBA Fall League, where they are playing up in the 6th grade division.  When we release our 2021 Power Rankings in the spring, we expect OBC to be right there at the top.