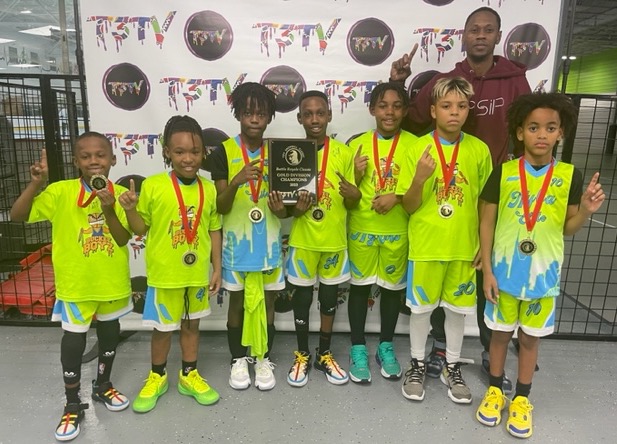 On Sunday, we had the opportunity to checkout some of the action at the T3TV Snowball Classic in Cincinnati, Ohio. We mostly concentrated our attention on the two 3rd grade semi-finals and championship game. The semi-finals pitted the Columbus-based Charging Elite versus the Texas-based Liv on Bluechips Black, and Indiana’s Hoosier Phenoms versus the Tennessee-based NYBA Elite. In the first game, the Blue Chips easily defeated Charging Elite by a score of 51-29 to advance to the final game, while NYBA Elite got by the Hoosier Phenoms 47-37 to punch their ticket to the big dance.

Obviously, the second game was a much closer contest and featured several nationally ranked players between both teams. Although Cavalli Goldthreate and Keylon Thomas are “the guys” on that squad, the star of game was newly acquired Jaxson Spray, who dropped a game-high 21 points. Not only did Spray do his thing offensively, he used his size and mobility to rebound at a high level and protect the rim. We’ve seen Spray on a couple of occasions now and we’re convinced he deserves more national recognition (i.e, a national ranking)! For the record, scoring for the other nationally known players included: Keylon Thomas (10), Cavalli Goldthreate (9), Tu Jennings (8), Camden Day (8), Tristian Graham (6) and Aydin Garth (4).

The title game featured the #4 ranked Liv On Blue Chips Black against the #6 ranked NYBA Elite (according to Top 25 Scout rankings). Although the Blue Chips would jump out to an early 5-2 lead, NYBA would close the gap and take a 13-7 lead midway trough the opening period. Later, the Blue Chips would ride a 11-0 run to an 18-13 lead by half time. The second period would be a back and forth affair with multiple ties and lead changes. The Blue chips would hold a 34-28 lead at the 5:53 mark, but a Keylon Thomas 3-point barrage would cut the lead to 35-36 with 3:13 left in the game. NYBA Elite’s Drake Sharp hit a couple of crucial buckets late to put his team up 41-37 at the 1:30 mark, and despite some questionable shots late in the game while holding the lead, NYBA would go on to secure the 42-39 win and claim the 3rd grade title.

NYBA Elite was lead in scoring by Keylon Thomas, who went for a game-high 20 points, most of which came from crucial 3-pointers (4). Behind Thomas in scoring were Jaxson Spray (9) and Cavalli Goldthreat (6). For the Blue Chips, Jace Vanderbilt led his team with 16 points on 4 treys, followed by Isaiah Shands (10), Brayden Boston (6) and Cole Adams (6). All in all, with 3 highly ranked teams in the final four, Sundays action was “fantastic!”

All-Tournament Teams (Based on Final 4 Performances)