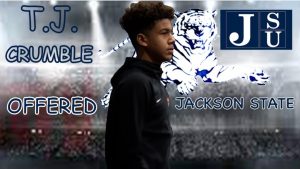 He’s only in the 7th grade, but nationally ranked TJ Crumble(6’6″/C/PF/2026/Morland Hills, OH) has already secured a division I scholarship offer.  Recently, the Jackson State University coaching staff pulled the trigger on Crumble after catching him at action while he was playing up a division in a Cleveland-area basketball tournament this past weekend.  Crumble has been atop our statewide rankings for years based on his consistent play at our events and others.  Just recently, in the NEO Showcase, we watched Crumble and was very impressed with his play.  In fact, we said this about him:

“Day one of the NEO Youth Elite Camp proved to be a platform for elite basketball players and several long-term prospects. Sonny Johnson’s event attracted a ton of talent and brought in kids from all across the country. However, despite the national scope of the 2-day event, the best player in the gym proved to be a local kid. Simply put, TJ Crumble (6’6”/C/2026/Moreland Hills, OH) is a problem! He’s super efficient using his big frame to post up on the block and to score shooting over his left and right shoulders. He’s also a skilled big with a soft touch around the rim. The problem is, Crumble is now putting in work on the perimeter and causing problems. He handles the rock well for his size and appears to have developed a jumper. This kid is a sure fire high major prospect that will demand early attention.” Congratulations to TJ and his family; we’re sure this offer is only the first of many to come!